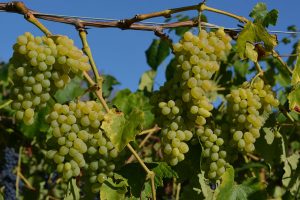 If you would love to grow grapes for eating, juicing or making into raisins, all you need is a little room and lots of sun. In our cool summer climate, there are many varieties that perform quite well, ripening from September through October. Some considerations for growing grapes are the same for table or wine grapes such as site selection, soils and nutrition. In a cool summer climate, table grapes are pruned and trained differently than wine grapes. If you are interested in growing wine grapes, visit our Growing Wine Grapes in Cool Summer Climates page.

Soils – Grapes prefer well-drained, sandy or gravelly soils. In generating the heat that grapes need to be productive, air temperature is not the only factor. Soil heat retention ability plays a major part in the ripening process. As a general rule, heavier soils are colder soils, and it is well worth the effort to increase your soil’s heat retention ability if you can. To maximize your soil’s heat retention ability, mound up the soil for each plant, 4″-6″ in elevation; either in a 3′ mound or down the grape row in a domed raised bed 4″-6″ tall and 2′-3′ wide. If your only choice is to plant in heavy soil, choose early ripening varieties such as Interlaken, Canadice, Lynden Blue and Jupiter.  Later ripening varieties like Reliance, Neptune, Faith, Hope and Gratitude will need warmer sites and well drained soils to thrive.

Mulches – Grapevines will not compete with grass or heavy weed pressure in their early years. If you want to mulch your vines here are a few things to consider. Organic mulches are unsuitable for grapes, as they cool the soil. Dark colored landscape fabric mulches will help warm your soil up as well as keep weeds down, but can provide cover for field mice, which can girdle the plants. If using landscape cloth under plants during the growing season, removing it late fall should minimize rodent impacts. Dark gravel mulches will also work. If you have rocky ground, piling the rocks under the plants will help hold the heat throughout the growing season. Do not under-plant grapes with groundcovers, as they also will cool the soil. 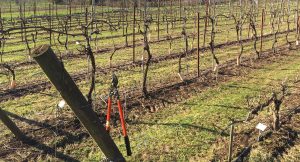 Nutrition – Grape plants will grow typically with high vigor in our climate. The reason is high organic matter in soils and adequate water through the growing year. Shearing canes once will typically keep the vines in optimal position. Use only very low rates of nitrogen fertilizers after the first year. Because of their aggressive growth habits, grapes will create nutrient demands on the soil. Annual applications of lime and Azomite or Sulpo-mag with micronutrients are going to be important for successful cropping. Grapes grow best with a soil pH of 6.8 or higher, so liming annually is a must in our climate. Irrigation is important mainly in the first year. Most sites do not need irrigation after the first year. If terminals (tips of shoots) are actively growing, the plants do not need water. 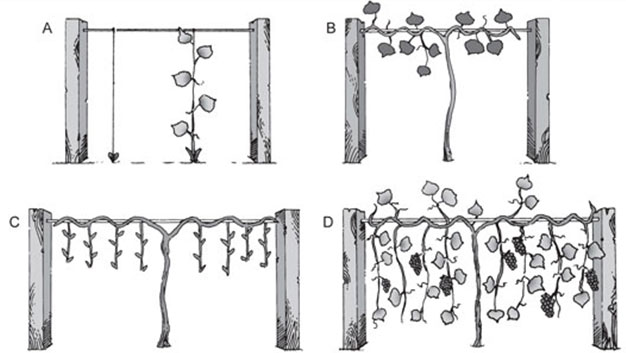 Most table grapes are grown on their own roots and are very vigorous. They benefit from a spur pruning and training system that produces more older wood than straight cane pruning.

One of the easiest training systems for table grapes is the Single Curtain System. Immediately after planting a dormant vine, remove all but the straightest cane (shoot). This remaining cane with be the foundation of the vine’s trunk, so selection of the straightest, upright cane will be beneficial. Cut this remaining cane back, leaving only two to four buds. Use a rigid stake placed alongside off the plant and tall enough to tie to the load wire, or tie a string from the base of the plant, near the soil surface, to the load wire.

A. In the first year, train the strongest 2 shoots up the string or stake and remove all other shoots. When the vine reaches the trellis load wire in year one or two, allow the shoots to grow upward through the end of the year. Wait to tie shoots down to the wire until the dormant season. Our recommendation is to prune your vines in late winter, mid-January or February. Grape vines break dormancy and their sap begins to flow early in the year, so pruning later in the spring will lead to sap “bleeding”. When your vines reach the load wire (5′-6′) prune or pinch the terminal of the shoot you plan to keep 3″-4″ below the load wire. This will allow more or less equally vigorous terminals (shoots) to push and fill in the allocated space on the wire. Train and tie the two lateral branches to the wire to form two cordons. Wrap the canes loosely around the wire beginning with the first wrap going over the top of the wire. This is so the wire is holding the weight needs few ties. Usually with wrapped canes only one tie is needed at the end of the cane. Remove all flower clusters in year two.

B. During the next dormant season, in early March, prune the lateral growth on the cordons. Select 1-year-old canes spaced 6 to 12 inches apart along the cordon to form the spurs You do this by cutting canes back to three to four buds.

C. In later years leave renewal spurs when you can (these are shoots that push from the basal bud the year before. Cut each renewal spur back to two to four buds. After the danger of frost has passed, growth from one or two buds per spur can be removed leaving 1-2 floriferous canes per spur if vines are growing vigorously and were undamaged by low temperatures. Remember maintaining a curtain of 3-5 canes per foot will give you the best results. Generally, during the third growing season, growth from the lateral-growing cordon produces the “curtain”.

D. If vines are spaced 8-12 feet apart, each cordon should be maintained at a 4-6-foot length. Position the growth from the cordons downward during the growing season, and allow only one cluster of fruit to set per cane during this year. In following years, eliminate the old spurs during dormant-season pruning and use renewal spurs to develop the curtain. 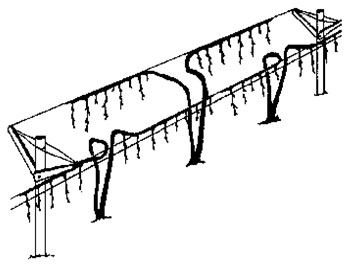 Another promising system that could be more productive is the Geneva Double Curtain, GDC, developed decades past by Cornell University. Geneva Double Curtain or GDC trellis design consists of a horizontally divided canopy. The goal of the GDC system is to manage a dense canopy by dividing it in two, allowing more sunlight to reach the fruit renewal zone.

With this system, grapevines are trained from the trunk to bilateral cordons and pruned to retain short canes originating preferably in the lower 180 degrees of the cordon. Shoots are also positioned downward creating a canopy that has the appearance of two “curtains” on each side. Cross arms, usually four feet in width, separate the cordon support wires. This division in the canopy increases  sunlight exposure while reducing canopy density. Proper shoot positioning must be maintained to keep the canopies separated and to allow sunlight to reach the fruiting region.

Some varieties of table grapes, including Jupiter, can also be grown with an upright cordon spur pruning method. In this system, cordons are trained along a

low wire, with upright spurs. These spurs are two to four buds each. When the shoots emerge each spring, they are thinned to no more than 3 shoots per running foot of cordon. Usually the outer buds on each spur are more productive than the inner buds. The shoots are trained upright, and catch wires hold them in position.