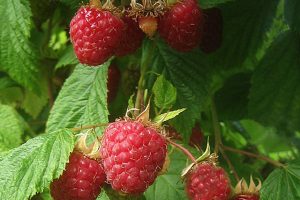 We have a general guide to getting started with cane, shrub and vine fruit here.

Summer bearing varieties, such as Cascade Delight, Meeker or Tulameen, grow a cane each summer (the primocane) which forms flower buds in autumn that flower and fruit the following summer. While these canes are fruiting (now called floricanes), new primocanes emerge for next year’s crop.

Fall bearing, or everbearing types, such as Fall Gold and Caroline bear fruit on the top half of the first year primocanes in late summer and early fall.  They overwinter and produce a second crop on the lower half of the canes the following June and July. If the canes are cut to the ground each fall, the late summer/early fall crop is larger and of higher quality.

Plant dormant, bare root canes from late winter to mid-spring. Plant no more than 2″ deep, 30″-36″ apart, with rows spaced 8′-10′ apart. At planting, cut the cane to 3-4 buds above ground level. Each year, allow 10-12 primocanes to grow from each plant, removing excess primocanes by hoeing or tilling.  Keep the rows 12″-18″ wide.

Soil moisture is crucial during the fruit ripening stage of growth, and in late summer and early fall when flower buds are forming for the following year’s crop.  Irrigate if rainfall in insufficient. Overhead watering during fruit formation can lead to fruit rot; drip or soaker hose irrigation is preferred.

For two crops on fall bearing types, remove the top half of the cane after fruiting on 10%-20% of the strongest canes, leaving the lower half to fruit the following summer. Remove weaker canes by cutting them to the ground. The fall crop on most fall bearing varieties is superior, so most growers cut all the canes to the ground in late fall. 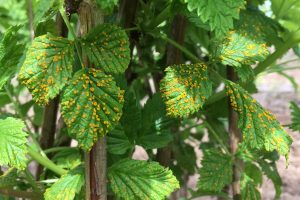 Most common problem in raspberries is root rot caused by winter wet soils. Canes gradually die off, and can easily be pulled from the soil. The only solution is to start a new bed of raspberries elsewhere in better drained soils or raised beds.

Yellow rust is fairly common in raspberries, especially in commercial raspberry growing areas. For the homeowner, removing and destroying foliage and fruited canes after harvest is the best control.

Another less common problem is a complex of viruses known collectively as Raspberry Bushy Dwarf Virus (RBDV). The main issue with an infection is that the berries become somewhat crumbly and not good for freezing, although flavor is still good and the berries can be used for jams. One characteristic symptom of RBDV is yellow growth on primocanes. The viruses are spread through pollen, so again, replanting in the same area may lead to infection of the new plants.

Both raspberries and blackberries can be targeted by the Spotted Wing Drosophila fruit fly. This pest lays eggs on fruit just as it ripens. The eggs hatch and the larvae develop within the fruit. In the home garden, sanitation (removing and destroying infected fruit) plus trapping can be effective. The larvae in the fruit is also killed by freezing and jam-making, and is not harmful to consume. 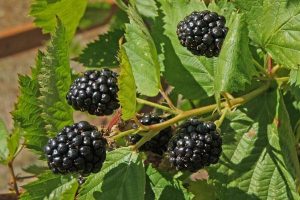 Like summer bearing raspberries, blackberries fruit on second year canes. They should be trellised, and canes that have fruited are removed each fall or winter.

Blackberries are more soil tolerant than raspberries, but will grow and fruit best in well drained sites. They need full sun.

Plant dormant canes late winter through mid-spring. Space the plants 4′-6′ apart, with the rows spaced 9′-10′ apart. All primocanes are allowed to grow each year. Blackberry primocanes emerge from a crown, and the roots do not run aggressively like raspberries.

A trellis system is needed to support the fruiting canes. One recommended system is similar to that for summer bearing raspberries, with a top wire at 5′ and a second wire 18″ lower. The fruiting canes are woven between these two wires. The primocanes are allowed to trail on the ground. Blackberries can also be trained upright like raspberries, but are much more vigorous and need a taller set of wires.

Blackberries are more tolerant of winter wet soils than raspberries, but can succumb to root rots if the soil is too wet. Mounding the soil or building raised beds can help prevent root rot.

Blackberries can be infected with rust diseases, which are a fungal disease. The invasive Himalayan blackberry and our native evergreen trailing blackberry are both susceptible and can carry the disease. These fungal diseases can cause defoliation, which can stunt the plants. Control by pruning fruiting canes after harvest, and removing fallen foliage in the fall and destroying.

Blackberries can also be infected by RBDV, although it is uncommon unless they are planted near infected raspberries.

Spotted wing drososphila can also be a problem, see raspberry section above.