We have a general guide to getting started with shrub and vine fruit here.

Currants and gooseberries are shrubby bush fruits that do very well in most parts of the Pacific Northwest. They are tolerant of many soil types, and thrive in sun or partial shade. 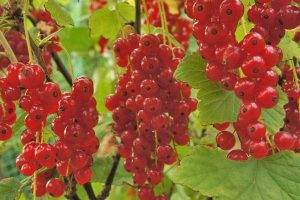 Red currants are easy to grow

While currants and gooseberries are tolerant of many soil types, they prefer well-drained organic rich soils with a pH of about 6.5-7. The best fruiting will be in full sun sites, but they will also fruit in partial shade. Space the plants 5 feet apart, and apply a layer of mulch to conserve moisture in the summer. Remove the fruit the first summer to help establish strong root systems.

Most currants and gooseberries are grown as freestanding, multi-stemmed bushes. They can also be trained as standards (small bushes on a short trunk), or fan trained against a fence or wall. The goal in pruning gooseberries and currants is to develop an open, vase shaped bush with even spaced branches.

At planting, cut back the plants to 6″-10″, choosing 3-6 healthy well-spaced branches and if necessary removing excess branches. After the first year of growth, during the dormant season, remove all but six to eight of the most vigorous shoots. At the end of the second growing season, leave the 4 or 5 best one-year-old shoots and up to 3 or 4 two-year-old canes. At the end of the third year, prune so that approximately 3 or 4 canes of each age class should remain. By the fourth year, the oldest set of canes should be removed and the new canes allowed to grow. This system of renewal ensures that the plants remain productive because young canes always replace those that are removed. A strong, healthy, mature plant should have about eight bearing canes, with younger canes eventually replacing the oldest.

Currants and gooseberries tend to ripen their fruit over a 2-3 week period in mid-summer. Some trial and error is needed for each cultivar to determine peak ripeness. Gooseberries easily come off the plant when fully ripe. Currants may need taste testing to determine ripeness. Currants often are borne in clusters or ‘strings’. If the fruit is to be processed, the entire string can be harvested and cooked with the fruit during processing.

Currants and gooseberries are fairly heavy feeders. Use a good woody plant or fruit tree fertilizer. They prefer a soil pH of 6.5, so liming the soil at planting and annually in the fall is recommended. Keep the plants mulched to conserve soil moisture.

There are three main insect pests that trouble gooseberries and currants in the Pacific Northwest climate. 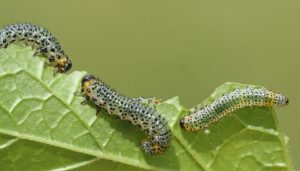 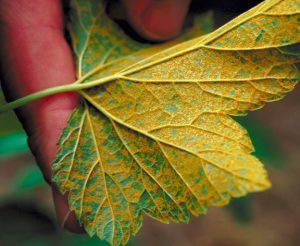 Diseases are uncommon but possible. Choosing your planting site carefully helps prevent the bushes from being stressed and subject to problems.