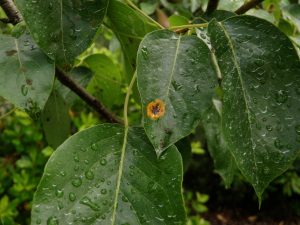 Pear Trellis Rust is a fairly recent disease in Western Washington, but recently has been showing up with increasing frequency.

As with most rust diseases, this disease has two host plants, fruiting pear trees and some kinds of juniper (Juniperus sp). Both must be present for the disease to complete its life cycle. If this disease shows up in your orchard, you should first remove junipers within 300 feet of your pear trees. Unfortunately, this is not always an option, especially if you live on a city lot, and the junipers are not on your property.

The first signs on pear are bright orange spots on the leaves most years in late May (some years in late April). The spots enlarge during the summer reaching a diameter of one to two cm. By late June, the centers of the spots (on the upper leaf surface) exhibit numerous black dots. In July and early August, the infected area of the leaf becomes thickened as spore-producing structures push out from the lower surface.

From late August through to leaf drop in October or November, grey hair-like projections resembling trellises emerge from the lower surface and release spores. These spores are capable of infecting junipers. The only time that infections are obvious on junipers is during wet weather in April and early May. At that time, swellings on the juniper branches release an orange jelly-like mass of spores. These spores are capable of infecting nearby pear leaves which are just starting to grow. After the spores are released, the infection on juniper remains dormant until the next spring. Infected junipers may also have branch die back as a result of the galls.

Also known as Pear Sawfly. The larvae appears usually in late summer and rasps its way across the leaves. It is most common on young and stressed trees and will also appear on cherry trees. If you see it late in summer or early fall when leaves are getting ready to drop, ignore it unless it is totally defoliating your tree. If it appears early in summer, it can be hand-picked, or sprayed with horticultural soap, neem oil, spinosad, or dusted with diatomaceous earth. Using kaolin clay (Surround) will also reduce populations. 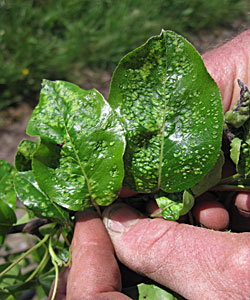 Pearleaf Blister Mite is a tiny mite that overwinters in pear bud scales, then emerges in spring to feed on the foliage of the tree. The feeding causes red blisters on the leaves. The mites will also feed on developing fruit.  The most effective control is a combined spray of micronized sulfur plus oil at leaf fall and again at spring bud break.The timing is critical- during the growing season when you actually see the damage there are no effective controls available to the home orchardist. 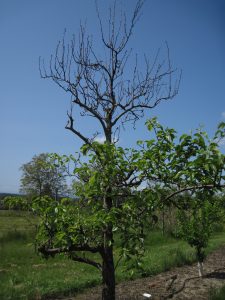 An occasional problem in young pears, especially Asian pears, is pseudomonas blossom blast and dieback. This branch and blossom dieback almost always follows hard frost during blossom bud swell. The disease is caused by a bacteria that enters frost damaged buds and spreads through the bark. A copper spray at leaf fall and again at bud swell can help prevent pseudomonas, but it will not cure it.