This is a fairly recent disease in Whatcom and Skagit counties, but recently has been showing up with increasing frequency. Because of the accelerated spring, the spots are showing up earlier than usual this year.

As with most rust diseases, this one has two host plants, fruiting pear trees and juniper (Juniperus sp.). Both must be present for the disease to complete its life cycle. If this disease shows up in your orchard, you should first remove junipers within 100 feet of your pear trees. I know this is not always an option, especially if you live on a city lot, and the junipers are not on your property. 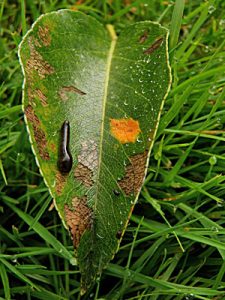 Early stages of pear trellis rust (plus pear slug, a sawfly larvae that will chew on pear leaves). 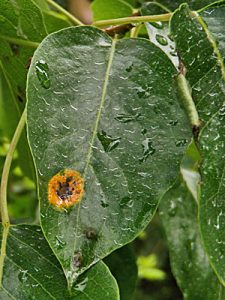 The first signs on pear are bright orange spots on the leaves most years in late May (this year in late April). The spots enlarge during the summer reaching a diameter of one to two cm. By late June, the centers of the spots (on the upper leaf surface) exhibit numerous black dots. In July and early August, the infected area of the leaf becomes thickened as spore-producing structures push out from the lower surface. From late August through to leaf drop in October or November, grey hair-like projections resembling trellises emerge from the lower surface and release spores. These spores are capable of infecting junipers.

The only time that infections are obvious on junipers is during wet weather in April and early May. At that time, swellings on the juniper branches release an orange jelly-like mass of spores. These spores are capable of

infecting nearby pear leaves which are just starting to grow. After the spores are released, the infection on juniper remains dormant until the next spring.