Inside the Internship: Sean McWay 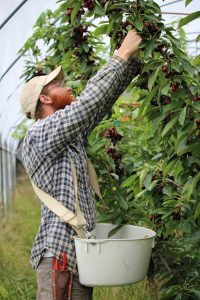 Last month I spoke with intern Sean McWay, a Missouri native, about his time at Cloud Mountain Farm Center.  Sean is drawn to the joys of being outside, working with his hands, and the scientific inquiry farming can provide.  This is an unsurprising coincidence as his most recent previous educational experience ended with a BS in Forestry from the University of Missouri.  Those interests seem to be the tip of the farming iceberg as Sean also shared how CMFC is providing a way for him to invest and share in the local community, and how that has allowed him to form a deeper human connection around agriculture.

I asked Sean about what drew him to CMFC, and he shared his desire to continue informing his understanding of farming with a more formal education on the subject.  Sean had multiple experiences in agriculture prior to CMFC, but was looking to broaden his horizons by gaining a clearer understanding of what agriculture can be, and building community around this learning.  Acquiring knowledge of techniques, answering a bunch of “whys”, filling in some of the gaps in his skillsets, and understanding multiple kinds of production systems were a high priority for him as he entered the internship.

A big benefit of learning at CMFC has been the experiential portion of the Education Days.  Visits to Whatcom and Skagit County farms have added an appreciation of the multitude of ways in which farms work.  Notably, each farm has some similarities but they demonstrate different routes toward success based on specifics of the situations.

It’s no mystery to Sean that he could grow things, but now knowing more clearly how the business piece works, understanding how things are sold and how to plan for leaner times, have given him perspective and confidence as he thinks about how a farm works and how folks create a living for themselves. Sean spoke of how CMFC is helping him achieve his goals by investing in this bigger picture understanding and how that has translated into a growing confidence in his ability to farm.

Sean was interested in learning the basics of a small food growing operation, and how to be successful financially.  He is very interested in at some point creating a business that will support the livelihoods of others as well as his own.  He is committed to truly supporting the lives of the people who would work alongside him.