Hilary grew up in the suburbs of San Francisco and attended college at the University of CA, Santa Cruz getting her degree in American Studies. After college she worked for a Bay Area municipality’s waste reduction program but realized her need to be outdoors, working with her hands to create something productive and beneficial for the environment and greater community. Not finding the practical opportunities in the Bay Area, she WWOOFed in Maui, getting her first experience with growing food. She then moved to Seattle to work for the Mountains to Sound Greenway’s Washington Conservation Corp restoring riparian areas and maintaining recreational use trails. After a couple road trips around the country she decided Washington was the best place to be. While maintaining a part time job at a nursery in Seattle she began volunteering with Seattle Tilth, with Seattle Youth Garden Works program and then interned with her partner, Sean, at the Seattle Tilth’s Farm Works incubator program in Auburn. After visiting and volunteering on a handful of farms around the Puget Sound area, Hilary and Sean decided to move to Whatcom county to take the internship at Cloud Mountain. “We were impressed with Cloud Mountain because they had a diverse farm operation and a good number of employees with extensive knowledge of various aspects of agriculture. The farm seemed to be run with a great deal of efficiency and I was impressed with the partnership they had with WSU in their production trials. I felt like it would be kind of like grad school for farming- and we get paid to do it.” In the future she hopes to homestead with her partner and be active in creating a strong and healthy community through good food.

Cloud Mountain is a mountain of projects. The farm has undertaken so many experiments growing different fruits and specialty crops that I was at a loss to think of another project to take on here that they haven’t already tried or that I could actually manage in the eight months I am here and wouldn’t seem to be the equivalent of a PhD program.

After picking up The Resilient Gardener, by Carole Deppe I was inspired to learn more about how to grow more of my own staple and storage crops, and to practice growing and saving seed.  Thus, I was pleased to learn about Krista Rome and the Backyard Beans and Grains project” she has been working on since 2008.  I committed to help her for the season to gain more exposure and experience in growing these crops and save their seed. The purpose of her project is to grow and select for seed different dry legumes and gains that will perform well in our region. All of her crops are open pollinated varieties that home gardeners can continue saving seed from and not rely on seed companies for hybrid varieties. 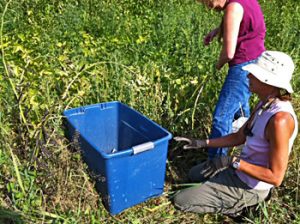 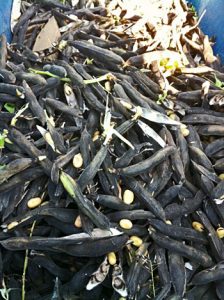 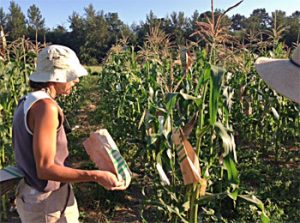 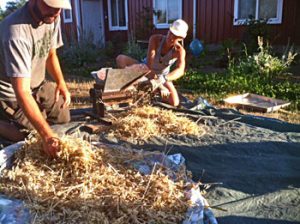 Grains and beans are such a large portion of our diet, yet it is difficult to find locally grown sources, not because they aren’t suited for our climate but because the evolution of industrial agriculture has been able to produce cheap grains and beans with large monocroppings of a few main varieties making it more difficult for small to midsized growers to compete.

This year, in addition to the regular seed trials she is working on a Non-GMO corn project. Beans and grains are mainly self pollinated, meaning they fertilize themselves with their own pollen before their flowers open. Therefore, it is rare (though possible) that there is cross pollination between different varieties grown in close proximity.  However, corn is one exception and is wind pollinated. Corn needs to be  around corn of its same variety in order to be pollinated and produce full ears of kernels. With the amount of Genetically Modified corn that is being grown for feed corn in the country and in the county it is hard to be sure your crop of organic, non-gm corn is pure or has been cross pollinated with the neighbors gm corn. This year we hand pollinated the corn varieties to be sure to keep the saved seed GMO-free.  Krista doesn’t grow sweet corn, only popcorn and dent and flint corn for flour.  You can tell if your pop or flour corn variety has crossed with sweet corn because the kernels will be shriveled, or if your sweet corn was pollinated by a starchy corn the kernels will be chewy and not sweet.

Other goals we had for the year was to develop more efficient low-tech threshing methods. Krista has always threshed by laying completely dried seed heads on a tarp on a hard surface and shuffle dancing on top of them to get the seed to release from its casing and settle on the bottom of the pile. After the stocks , pods, and other large debris is removed from the pile a box fan is used to winnow off the chaff, so that the lighter chaff blows away and the larger grain falls back on the clean tarp or another bucket. Sometimes a few winnowing is necessary to remove all chaff. While this process is very manageable and can be quite fun, there are dreams of a pedal powered thresher in order to process larger amounts more efficiently.

To continue pursuing my interests in seed saving I attended the Organic Seed Breeding class that was put on by High Mowing seeds and the WSU research station in Mount Vernon in the beginning of August.  I am inspired to learn more about organic seed production as a way to keep diversity in our food crops and in producing hardy seeds that are more suited to organic farming systems. I believe there is a lot of opportunity for small growers who are interested in growing organic seed.  I am quite excited about the direction my intern project has taken me.