Intern Profile: Sean D’Agnolo
Sean is a carpenter by trade. Originally from Minnesota, he moved to Seattle to be close to family. The desire to start a landscaping business with his brother lead to his discovery of Seattle Tilth, through which he connected with a Puget Sound farm, where he worked four days a week and developed an interest in food systems. He came to Cloud Mountain, he said, “to soak up all the information I can and see how it translates to other things I may want to do.”

Working at Cloud Mountain, he said, gives him an example of the dynamics necessary for a farm to survive in today’s marketplace, such as the ability to take in a lot of information, to be open to new models of farming, and to be open to experimenting and reinventing yourself. “You need to be able to identify what works and what doesn’t and to know how to move between them with an eye for opportunity.” He appreciates the diverse knowledge of Cloud Mountain’s staff and believes saturation is “the way to go” for learning farming. Even with spending 40 hours a week at Cloud Mountain, he said as time goes by he’s likely to be spending more time on the farm. He’s talked of pitching a tent.

As interns we have been given the great opportunity to choose a focus around Cloud Mountain on which we would like to work independently towards some hopefully positive growth. For my Independent Project I chose to focus on the inputs Cloud Mountain purchases, which has since become at least two projects for now. The first is to organize said inputs in to some intelligible format, and the second is to focus on an input or two I feel I may be able to have some positive impact on; whether that means changing that input to be able to buy it more locally, more economically, or lessen our environmental impact.

The first large input I latched on to was the mined/manufactured slow-release fertilizer we use in our nursery to keep plants healthy in a pot. Biochar, a sort of fine charcoal made to sequester carbon and enrich soil, was something that came to my attention as not only increasing mycological and microbial activity, but also possibly regulating the release of nutrients from nutrient-rich organic material or compost in to the soil around it. This sounded delightfully like the slow release fertilizer we were currently using in the nursery, but is ecologically on the opposite side of the spectrum, could be organically certified, and is a material we could possibly create on-site from orchard prunings! I was very excited. 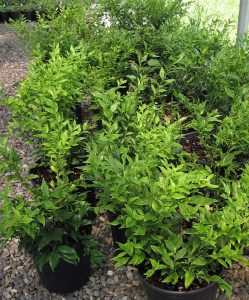 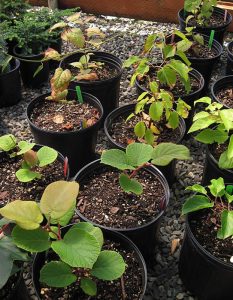 Kiwi Experiment- too much compost!

I read up, with some help from Mark Fuchs of WSU, and Marv and Jason Strubel, and learned a little about the process of pyrolysis and the results. I hoped to create a kiln that could serve as a model for other small farms, and would capture not only the biochar, but also the wood oil, which could be refined in to a renewable bio-fuel. I found quickly that this was not only very difficult on a small-scale farm model, but has not to date been created on any scale with much success in the last few centuries. So at this point my goals for work with the Biochar have two foci; first to test existing sources of Biochar in nursery pots to see if we can produce similar health in plants to the currently used manufactured fertilizer, which would hopefully lead to bringing our nursery in to Organic status. This effort has been thus far facilitated by donations of Bio-char from Black Owl Biochar and Soil Reef Biochar. Secondly to pursue kiln designs which could be useful and affordable to the small farmer by their ability to serve multiple functions simultaneously, such as a small kiln that could heat a greenhouse through the winter while producing Bio-char. Since this is not my only project this summer I would be delighted to gain any input from our reading public, and strongly encourage you to send your ideas or suggestions.