Chris broke from an eight-year career as a wind energy engineer in Seattle to come to Cloud Mountain as a full-time farming intern.

During his undergraduate years studying engineering at Michigan State University, Chris became active in environmental issues and committed to positive solutions. “How we generate and use energy is the source of some of our greatest problems,” he said, adding, “I later realized that our food systems, and the issues caused by those systems, parallel energy in many ways.”

His fascination with wind energy became his focus in graduate school, which later led to a career testing wind turbines throughout the country and internationally from his work base in Seattle.  Then he and his partner, Mia, who also works in renewable energy, took a year off to travel and volunteer throughout Latin America. They observed close up the low-input agrarian culture in much of rural Latin America. Upon their return, Chris and Mia started intensively gardening their city yard, began raising chickens, and became involved in the many local food projects in Seattle. At some point Chris was interested in larger food systems and a farming lifestyle, he says, “I decided I wanted something different. I wanted to get outside more, to move my body more, and to be more connected to the food I was eating.”

He came to Cloud Mountain for training because “I want to know how to grow food successfully and do it in a way that’s not destructive to our environment. We need to move away from resource extractive methods of food production and I want to contribute to that effort. It’s also about lifestyle: producing something truly necessary, being healthy, and having a connection to the land and local community — not working indoors everyday behind a computer. Besides that, plants are simply fascinating and we should spend more time with them.”

Chris recently purchased a small farm property near Cloud Mountain where he hopes to continue to develop farming skills and be a responsible steward of the land.

Cloud Mountain has been interested using more compost on the farm and I’ve been experimenting with backyard composting for several years, so I was excited to take on a farm scale composting project during my internship. Applying high quality compost has many benefits including: increasing organic material in the soil, improving soil structure, reducing the need for fertilizer, and enhancing microbial activity- in many ways it’s crazy magic. In Whatcom County there are many dairy farms that produce a large volume of “dairy solids,” a mix of manure and bedding material, and often this material must be removed from the dairy to prevent over-application to fields and contamination of ground water. The goal of this project was to develop a system appropriate for Cloud Mountain Farm (and hopefully others) to compost commonly available dairy solids into low-cost, high-quality compost that meets pathogen reduction guidelines. 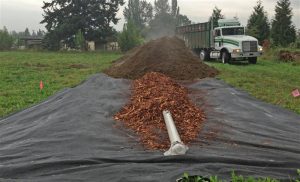 Pile being formed, with perforated pipe, a layer of wood chips to improve airflow, and dairy solids dropped by truck.

After some research and talking with the extremely helpful folks at Washington State University, I decided to use the “Aerated Static Pile” (ASP) composting method, which uses a blower to force air through a perforated pipe and into a long single pile. The air supplies oxygen to microorganisms that accelerate the composting process and allow the pile to reach temperatures high enough to kill weed seeds, pathogens, and break down phototoxic compounds (above 113 °F). A major advantage over other methods is that the pile does not need to be turned after forming, greatly reducing the labor required. And as I learned during my internship, available labor is not easy to come by on the farm.

The initial pile size was roughly 80 ft long, 12 ft wide, and 6-7 ft tall, and was formed with four, approximately 15 yard, truck-loads of dairy solids. Recommendations from the “On-Farm Composting Handbook” were used to size the equipment and pile. A datalogger/controller was used to control the amount of time the blower was on and record the temperature of the pile on a continual basis. The temperature sensor was located 18 inches below the surface, at two-thirds the length of the pile, with periodic measurements taken in other locations around the pile to make sure it was evenly heating. 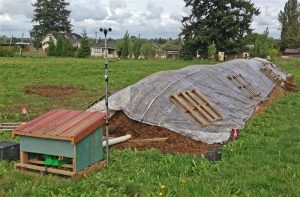 Pile formed and cooking. Blower located in the “doghouse”

After some initial experimentation with blower timing, the pile temperature rapidly rose and was maintained between 131 °F and 170 °F for far longer than the National Organic Program requirement of 3 days; at the time of writing the temperature was in this range for more than 17 days.

After some initial experimentation with blower timing, the pile temperature rapidly rose and was maintained between 131 °F and 170 °F for far longer than the National Organic Program requirement of 3 days; at the time of writing the temperature was in this range for more than 17 days. 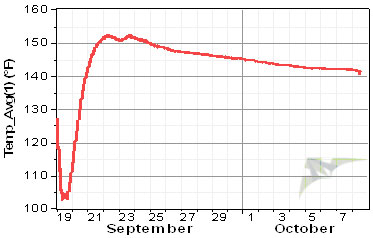 A plot of the pile temperature over time

The blower was also only required to run for one minute out of 30, about 1/10th of what the literature suggests. When I tried the longer blower times recommended to me, the temperature of the pile rapidly cooled, possibly due to the lower fall air temperatures we experienced when we got started. This was good news, as the lower power requirements may make it feasible to power the blower with a modest solar panel and battery, alleviating the need for a nearby grid connection and allowing composting to happen nearer to or even in fields where compost will eventually be applied. Temperatures at the bottom edges of the pile did not reach more than 120 °F, and should be separated from the finished compost. Future compost piles should be covered in a layer of finished compost, as suggested by the literature, to avoid having to remove edge material. We should be able to save some of the finished compost from this batch to use for a cover material for the next one.

With so much activity on the farm the compost project got off to a late start, and we’re still waiting to see how long it takes for the temperature to drop and cure the pile. Thankfully the pile did meet the time and temperature requirements we were shooting for, so despite not being quite done, I can be confident I’m not leaving a big pile of poo behind as the internship comes to a close. It’s compost!