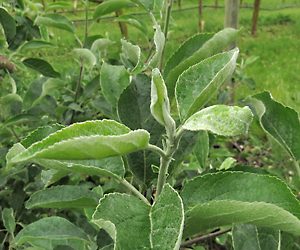 The past couple of weeks, people are really starting to see powdery mildew raise its ugly head. Powdery mildew is caused by fungus in the genus Podosphaera. Powdery mildew spores overwinter in the leaf buds of plants, and germinate just as the new shoots are emerging. At that stage, sulfur or lime sulfur sprays can help prevent the new shoots from becoming infected. Weather conditions also are a factor. Conditions that favor mildew formation include dry foliage, high humidity, low light and moderate temperatures.

How can you deal with powdery mildew infections once they occur? Sulfur only suppresses the infection, but does not cure it. If the tips of most of your apple tree branches are silvery gray with mildew, here are a couple of actions to take:

Most years, powdery mildew is mostly a problem for apples. This year, the weather conditions are such that even table grapes (usually resistant) are showing signs of mildew.

It’s also time to start watching degree day accumulations if you plan to spray for codling moth. Last year, we posted a tutorial on using local weather stations to time your sprays. Ideally, your first control spray should go on at 525 GDD- Bellingham Airport is currently at 396. If we get some warm weather, that target spray date will be here by mid-June.

If you’re planning on using barriers rather than sprays to control apple maggot and codling moth, now is the time to thin your fruit and get those barriers on!