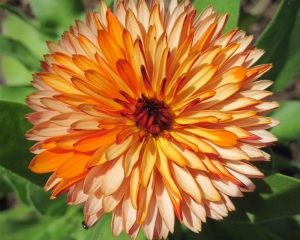 My initial idea for an intern project for the year was to keep mason bees in home-made nests and try to overwinter them on the farm.  If it was successful the farm could possibly reduce or eliminate the honeybee hives we pay to bring in each spring, thereby internalizing some cost and becoming more self-reliant.  Ultimately, the set-up for this initial project became a bit more expensive than anticipated and so it transformed. I still had an interest in pollinators on the farm, so the project transformed into a native pollinator observation project.  The purpose of the project is to observe and count a diversity of native pollinators in key blooms around the farm throughout the year.  Hopefully this will lead to a better understanding of which are the primary pollinators for certain crops, or in certain times of the year.

The project is a long term one that will require data collection for many years in order to actually understand the population and diversity of the native bees as well as how long during the year they are active and what practices the farm might engage to attract and keep these pollinators healthy.  It is very important that the areas sampled and the time of day and year be the same or as close to the same from one year to the next for the research to have any validity and draw usable conclusions.  I have been collecting my data every Wednesday morning for about an hour.  It’s a great way to start the day.  I have five observation counts done so far this season and am dialing in my method for collecting the data.  I like to walk the farm, which can take a while, and see where the most activity is happening as well as see which flowers will soon be blooming so I can make good decisions about where to take my counts.  Because of the timing, most of my counts have been done in hedgerows and the display gardens since pollinators need flowers in bloom to collect nectar and pollen.  This year I missed starting my counts early in the orchards and hope that future interns will start earlier than I, so they could incorporate that important data.

I am working on trying to identify bees, mostly bumblebees, but this is extremely difficult and I realize now I need to either become more proficient with a camera or set up traps so I can capture some.  I did not realize how many species of bumblebees there are and how quickly they seem to move; those guys don’t stop!  There are a great number of resources on the web. Sites even help you identify the bees, but without great photos even an expert becomes useless at identification and really can only give you general information. 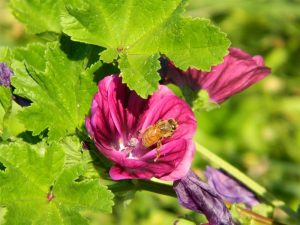 There are a few things that I do know now about attracting and keeping native bees on the farm that are great general guidelines for anyone that is interested.  First, they need food, which just means they need flowers in bloom.  They do best when there is a variety of floral bloom over a good length of time, but they really do like native plants more than non-natives.  Second, they need habitat, which can be man-made nesting boxes or just creating the conditions for them to nest naturally.  Native bees do not make hives instead some use a wood cavity or create ground nests.  On a farm it is important to try to keep some spaces untouched if possible to promote a healthy nest site.  This can be done by allowing a dead branch or tree to remain if it is safe to do so, not tilling too much or too deeply and not applying pesticides when possible.  If pesticides must be used, do not spray when flowers are in bloom since that will obviously detrimentally affect your bee population.