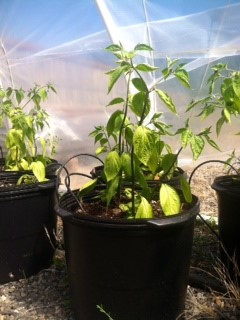 ‘Tis the season. Temperatures are high and the hothouse fruits are fruiting.

This furry fellow still has some days to go, but should turn into a spicy 2” beast with a heat level somewhere between Serranos and Cayenne.

A furry pepper you ask? Yes. It’s a Rocoto pepper, from the Andean highlands species Capsicum pubescens (most chiles produced for consumption are C. annuum). The fur seemed to help prevent aphids on the Rocoto seedlings in the greenhouse this spring, but its presence first intrigued me for another reason.

I was interested in the possibility of a perennial pepper. Peppers are perennials in warmer climates, so couldn’t one slowly breed peppers for cooler winter climates?

I looked into the Rocoto (or Manzano) peppers because of their cooler origins. They are generally grown at higher elevations and more resistant to low temperatures than your average pepper. That and stories of three-year-old plants producing 15 foot vines and several hundred pounds of fruit per plant.  I found red, yellow, and orange varieties from Redwood City Seed Company.

The peppers were sown in early March and by early April most had germinated. Orange, in a pattern oft-repeated, was the most successful, with 22 seeds germinating by April 11, and all 25 up by May 1. Red and Yellow had 17 and 18 seeds germinate respectively, and only one more Yellow Rocoto had germinated by May, when I culled to the 10 strongest plants of each variety.

Then I loaded the peppers into pots – two plants to a 7-gallon pot full of a woody potting mix. Not soil? No. Since the Solanaceae family (peppers, tomatoes, eggplants, etc.) is supposed to appreciate a more fungal environment, and peppers like to be on the dry side of moist, I thought the woody mix would better suit them. I’m not sure if this is the case. The long-term nutrition held in good old dirt is less prevalent in the potting mix. But there’s always more to learn.

Without enough nutrients the peppers looked pretty shocked. I was also working on managing a small hoophouse and getting different information about whether peppers wanted to be hot or not so hot. Lesson learned: keep the sides up. So much easier to manage and a little house heats up so quick!

So with a cool breeze to motivate them and a refreshing mix of a teaspoon of liquid kelp and a teaspoon of 2-3-0 fish fertilizer per pot per week, the peppers rebounded nicely and put on some dark foliage and then flowers. 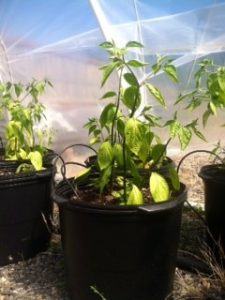 Orange was first to flower 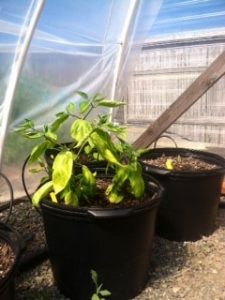 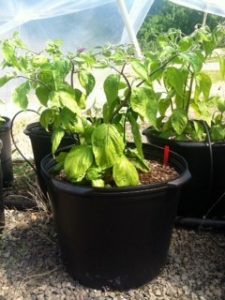 And the Red are somewhere in between

That said, there are many variables I could have mitigated better given a second run. I have had little control over edge effects: each plant is on some kind of edge (as you can see, one next to the wall, the other inside). Ideally, plants would be planted in blocks and the central plants observed. More plants should be planted for statistical relevance. And Rocoto peppers like lots of sunshine and cooler days. Early on, the conditions of these peppers were often the opposite: heated and grey.

But I will press on. I plan to save seed once the peppers ripen (Seed to Seed outlines this process pretty well). I have been somewhat sloppy with isolation, counting on the perfect flowers to self-pollinate and hoping the 40% cross-pollination rate for peppers is a) wrong, or b) will add interesting/helpful diversity. Then I will attempt to overwinter the best plants of each set in an unheated greenhouse and observe which do best as temperatures drop. Finally, next spring it all begins again: planting out the saved seed and the original Redwood City Seed. Janaki tells me she knows a woman who plants pepper seed she’s been saving for years in March outdoors, so hopefully there’s hope.

Perhaps these peppers just weren’t meant to be grown year-round in Western Washington, even with climate change. But they can at least adapt, a little at a time.