Plant of the Week- April 6

Plant of the Week- Pears

Right now at Cloud Mountain, all the Asian Pears are just passing full bloom in the orchards, with the European Pears just starting to flower. Pears are a relatively easy fruit to grow in our climate, so I thought we should highlight them when they are also adding ornamental interest to our environment.  In addition to the white flowers, the emerging leaves of Asian pears are an attractive bronze color. 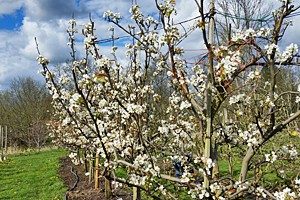 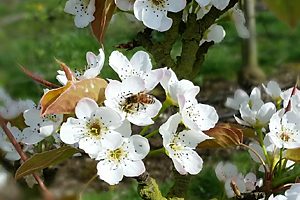 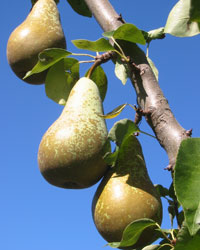 Honeybees don’t always find pear blossoms the most attractive flowers- this time of year they seem to prefer dandelions over pear bloom! One trick for making the bloom more enticing to the bees is to spray the flowers with a solution of one part sugar to ten parts water. You’ll see more honeybees on your pear trees, along with other not-so-well-known pollinators. This trick also works for early blooming plums.

Pears can be affected by pear scab, and just before and after bloom is the time to manage that. Micronized sulfur applied just before the blossoms open, again at petal fall, and a third time 7-10 days later will control most of the pear scab in all but the wettest springs.

If two varieties with compatible bloom times are planted and cared for, and the bees and other pollinators do their jobs, you’ll be enjoying pears each autumn! Asian pears can be ripened on the tree. European pears should be picked when they are still hard but the stems break when the fruit is lifted. These pears ripen from the core out; even when they are still hard on the outside, they will be sweet, and starting to soften at the core. The later ripening European pears- Conference, Bosc, and Comice- can be stored for months in refrigeration, and brought out to ripen in the depths of winter.