Plant of the Week- Styrax japonicus

Late May and early June in the garden is a time of flowering abundance. Most woody plants have flowered by now, but the annuals and perennials are just starting up. There are a few trees that wait to flower until now, though. One of the finest is the Japanese Snowbell, or Styrax japonicus. 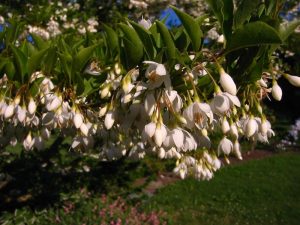 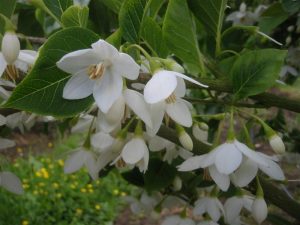 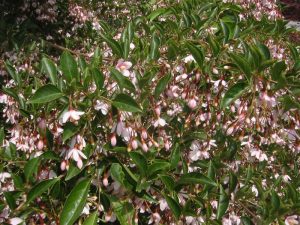 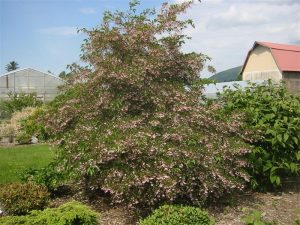 Japanese Snowbells are members of a large genus of plant native to warmer temperate and tropical climates of the Northern Hemisphere.  The Japanese Snowbell is native to Asia, and is one of the more common styrax used as ornamental trees. Relatively small in stature, Japanese Snowbell will grow to 20′-30′ high eventually, with a rounded crown. The simple green leaves are alternate, and turn pale yellow in the fall.

In late May or early June, Japanese Snowbells open their prolific bell shaped flowers. Most snowbells bloom white, but there is a good pink flowered form, Pink Chimes. Other selections of Japanese Snowbell are Emerald Pagoda, which grows larger and has larger leaves and flowers than seedling snowbells, and Carillon, which is a weeping form.

Most species of Styrax have a compound in their leaves and bark that have been historically used as medicines and as incense. Because these compounds are slightly toxic, very few insects feed on the foliage of snowbells. The foliage is also unattractive to deer.

One group of insects that do love snowbells are bees and other pollinators. The slightly fragrant flowers are very attractive to them, and a styrax in full bloom will often hum with a great number of bees in happy activity.

Japanese Snowbells prefer moist, rich soil that is not too wet in winter. They can grow in full sun or partial shade.