There are many century old apple orchards scattered around Puget Sound. The San Juan Islands had over 10,000 acres in tree fruits in 1900. Whatcom County had somewhere around 5000 acres that were apples, some pie cherries and plums. There were two packing plants, the Kale cannery in Everson and The Deming Delight Cannery that was housed near the Fairhaven shipyards. They produced three products at the Deming Delight facility; apple sauce, apple rings and apple chunks.

Pruning century old trees (and those not quite that old) 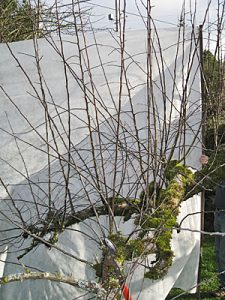 One limb of an old Gravenstein apple. You can see how the vigor in the tree has caused ‘watersprouts’

If you find yourself standing in your yard looking up at one of these infamous umbrella-shaped trees, consider yourself one of the privileged few who own and get the chance to prune one of these heirlooms. These trees were on seedling rootstock, so they were pruned to keep them from becoming giants. In the process, they became umbrellas with incredibly vigorous, annual ‘watersprouts’. So where do you start?

Branch placement, branch angle, branch caliper; these are the keystones to successful pruning. If these trees haven’t been pruned in awhile then the first year should be dedicated to several large cuts to either bring the top down or to open up light bays. The general rule is never cut more than 25% out of a tree in a year.

Remember that several big cuts will not impact the trees re-suckering tendency compared to a lot of little cuts. The first year stick to your major big cuts. You will want to develop a mental or written 3-5 year plan. Each consecutive year you will focus more on detail. 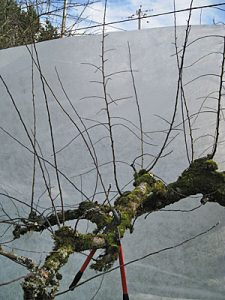 Same limb, pruned. Angled shoots are left to mature into fruit wood. We also left some of the strong upright shoots to soak up some of the tree’s vigor. Do not tip these shoots! They can be removed as two year old shoots, or left to form another tier of fruiting wood above the old limb.

Where you have lots of one year shoots suckering, try cutting out all of the really big ones, leave all of the one year shoots that have some angle to them and that are not too strong in growth (under 2’ in length). You can even bend these down close to horizontal to produce new fruit wood. One shoot every 12” works.

With the remainder of shoots evaluate how many of these shoots you can thin out. Remember the goal is to let light into the shoots you are leaving. If you can, leave what I would call a small collection of safety valves every 6’ or so. When finished, you would have several 1-year old shoots, several 2-year old shoots and one or two 3-year old shoots. Do not even think about tipping these. Let them grow with wild abandon.

Every year you cycle out the 3-year old shoots. They are easy to recognize because they should have been loaded with beautiful fruit. But no mercy here, cut them out at the base. Your 2-year old shoots- reduce the number to 2 or so and same with the one-year old shoots that are now the 2-year olds. Get the idea, you rotate out the suckers.

These mature trees have a lot of horsepower in them. These trees were not allowed to grow to the height needed to maintain a balanced tree. Cycling that vigor into shoots will let the rest of the tree begin to come into balance. And the weak shoots with some horizontal angle, you won’t believe the volume of fruit they will produce. What if there is still a lot of vigor in your tree? If this is the case then you will want to strategically choose several of these 3 year old shoots and let them develop into an upper tier of branches in the tree. Giver the new upper tier of branches at least 3′ or more above the lower tier of branches.

Shipping has ended for plants, but pick up is available! Dismiss