or Upright Fruiting Offshoot Cherries
An ongoing project at Cloud Mountain is ‘the cherry tunnel’.  In 2005, we began this growing trial in which we grow sweet cherries inside a 180′ long, 32′ wide high tunnel, trained to a trellis system.  Why grow cherries this way? Sweet cherries in Western Washington have several challenges, especially for the market grower.  Some of the biggest problems-

The benefit of growing cherries in a high tunnel- 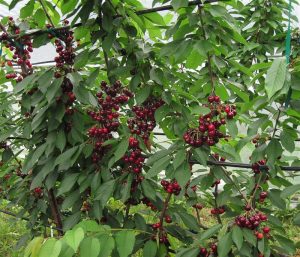 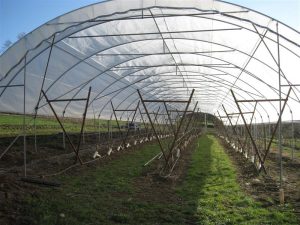 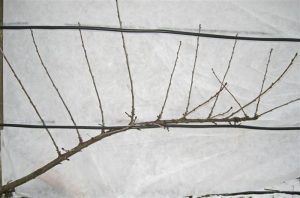 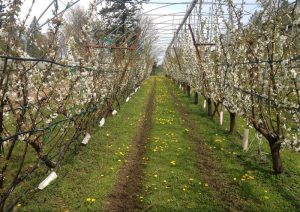 We know a market exists for sweet cherries.  We’ve grown them as free standing trees for many years, and can sell every unblemished cherry we produce. If we could produce more unblemished cherries, and get them to market earlier, we hoped it would pay off economically.

The cherries are all on dwarf rootstock, Gisela 5.  They are planted on an all steel ‘Tatura’ (V shaped) trellis, and trained in the ‘UFO’ – upright fruiting offshoot- method.  This allows us to create fruiting walls of branches that are very productive.

The poly is taken off the the tunnel in the winter, and left off the tunnel until after the trees bloom.  We would like to put the poly back up sooner, but honeybees are our main pollinizers, and they will not fly inside high tunnels. Bringing in bumblebees would solve that, but easier to let the honeybees do the work, and put the poly on after bloom is finished.  Putting the poly on earlier would help protect the blooms from frost.

The home gardener could duplicate this growing method in a small fashion, growing their cherries on a trellis under a small clear roof system.