Scouting, or looking for pest and disease problems on plants, is an important part of good orchard management. Winter is a good time to look at your fruit trees without their leafy clothing hiding problems. In our rainy climate, all manner of fungal and bacterial infections can damage fruit trees, mainly by forming galls or cankers on the bark. Take the opportunity during this season to look for these problems- catching them early can keep them from becoming serious problems. An excellent source of information for both the commercial and home orchardist is the Pacific Northwest Pest Management Handbook. This resource is aimed at both sides of the mountains and primarily commercial production, but it is a valuable resource for any serious gardener. Another excellent source of information is WSU’s Hortsense page, which is geared more for the homeowner..

Here are a couple of easy-to-identify problems to look for: 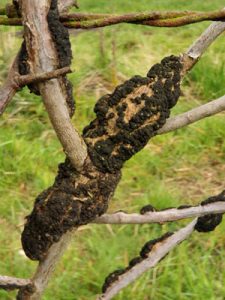 Black Knot on Plums
Apiosporina morbosa (formerly Dibotryon morbosum) is a fungus that can affect the branches of plums, prunes, and (more rarely) sour cherries. Infections form first small swellings on the branch, then eventually a black growth that can completely girdle the branch. The knots release new fungal spores every spring, just as the trees are waking up, and those spores can cause new infections in other branches, neighboring trees and even plum trees as far away as a mile or two. The spores infect the tissues, first causing swellings that are soft and light brown. The following year, these begin forming the black knots, which are capable of producing the infecting spores. This is one of the most serious problems with growing plums in our area. The best (and recommended) control is to prune out at least 3″ or more below any galls or knots as soon as you see them, and destroy (burn or put in garbage). If you see knots on large limbs or on the trunk, the knots can be excised with a draw knife, going at least 2″ out from the edge of the knot. Constant vigilance is the key here, cutting out knots whenever you see them. Because plums are fairly vigorous, even in areas with continual infections, keeping the knots pruned out can keep the tree productive. For our area, chemical sprays to control the disease are not recommended. Remember to sterilize your pruning tools between cuts, and dispose of diseased wood immediately, either in the garbage or by burning if allowed in your area. Complete recommendations are in the PNW Handbook on Disease Control. and at WSU’s Hortsense page. 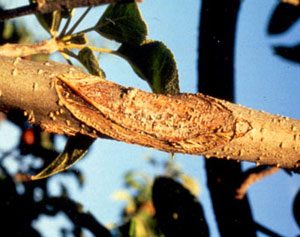 Anthracnose Canker
Anthracnose is one of the more serious diseases for apples, (and sometimes pear and quince), grown in the Puget Sound Region. This is a disease that is caused by a group of fungi. The fungus causes cankers on twigs and branches and a fruit rot commonly known as “bull’s-eye rot.” Fall rains spread fungal spores from limb cankers to maturing fruit and to young limbs and twigs.

Infection occurs in the fall, but cankers will not appear until spring. Small injuries, including frost damage before the tree is dormant, may facilitate penetration, but the fungus can penetrate uninjured bark. The canker grows actively only 1 year; however, the fungus continues to live 2 or 3 years in the dead canker tissue and produces large numbers of spores. Old infected trees can be sources of this disease.
In a wet fall, we will do 3  preventative sprays on the trees with some form of copper sulfate. Our first spray goes on the minute we are done with picking. This first spray is done with leaves on the tree after harvest before fall storms arrive if possible. The second spray is at leaf drop or very soon after. Third spray is about one month later. These sprays should be a very thorough spray “to drip” on entire trunk and branches. It is a good idea to add a sticker to the spray, to hold the copper on the tree longer. Remember this type of spray is only a prophylactic. You have to apply it before there is a problem. Pears are not as commonly infected with anthracnose, however we have seen a few cankers on pears over the years.

If you already have seen this disease in your orchard, these fall sprays are very important to keep the disease from spreading. You should also be ruthlessly pruning out cankers during dry weather to remove the source of further infection. Remove cankers by removing the branch at least 3″ below the canker. On young trees, you may need to remove the whole tree. You do not want to let this disease get a foothold in your orchard! Small cankers on trunks can be excised with a draw knife- cut the bark away at least 2″ from the canker. Some people report good success with flaming these excised areas with a small plumber’s torch after the cutting to ‘seal’ the area.There is also evidence that dormant sprays of Bordeaux plus oil, and scab and mildew controls at bloom time can aid in controlling anthracnose. Remember to sterilize your pruning tools between cuts, and dispose of diseased wood immediately, either in the garbage or by burning if allowed in your area. Complete recommendations can be reviewed here: 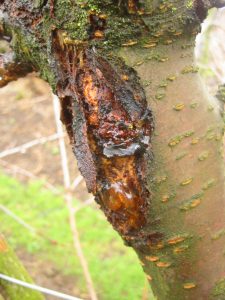 Bacterial Canker
Bacterial canker is a disease caused by a bacteria, Pseudomonas syringae.  It occurs mostly on sweet and flowering cherry trees, but can also affect other stone fruits including peach, nectarine, apricot, plums and almonds. The bacteria causes disease in two ways. The bacteria produces a toxin, syringomycin, that destroys plant tissues as bacteria multiply in a wound. The bacteria also produce a protein that acts as an ice nucleus, increasing frost wounds that bacteria easily colonize and expand. What this means is the ice nucleolus can lower the temperature below freezing when the air temperature is actually above freezing, causing frost damage even when there is no frost. Cold damage, incorrect pruning, poor nutrition, mouse damage and other stresses also increase the chance of bacterial canker. Source of the bacteria is other infected trees, and it is spread by wind and rain. Another canker, Cytospora canker, looks almost identical, but is more common on peaches.

Symptoms of bacterial canker include cankers, gumming, and summer die back of girdled branches. Dead buds and leaf spots also can occur.

Bacterial canker is most common on young trees 2-8 years old. Prevention is the best control.

So get out there at take a look at your trees. If you see issues that are small enough to be pruned out, wait for a dry spell (48 hours) to do your cuts. Remember to sterilize your pruning tools between cuts, and dispose of diseased wood immediately, either in the garbage or by burning if allowed in your area. Although it’s hard, sometimes you might need to remove a tree from your orchard to keep a disease from spreading. That’s farming!